16 OctWill justice be served for 35 lions killed for their bones?

A shipment of 342 kg of lion bones, the equivalent of 30-35 lions, was seized during a sting operation at OR Tambo airport on the 2nd October 2019. Amos Mututwa (34), a Zimbabwean citizen, was arrested and appeared at Kempton Park Magistrate’s Court yesterday for his bail hearing.

Mututwa was granted R3,000 bail by magistrate Prince Manyati and the case has been postponed until the 6th December to allow for further investigation.

“Blood Lions is concerned that wildlife crime does not receive the grave attention it deserves in our legal system. Too many of those arrested are granted bail, many of whom are non-South African nationals, who have left the country without justice being served,” says Pippa Hankinson (Producer – Blood Lions).

A documentary feature film that blows the lid off claims made by the predator breeding and canned hunting industries. 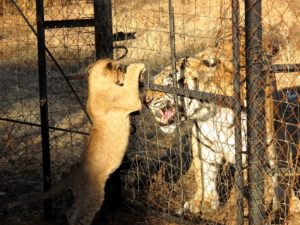